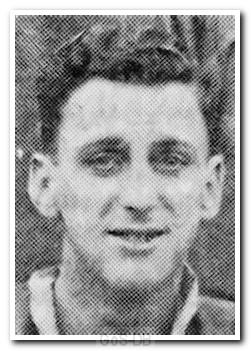 1. Came from: Rotherham United   Went to: Career interrupted by WW2

Smith was born in Shirebrook, near Mansfield, and started out locally with Sutton Junction. A versatile, attacking player who could play on either flank, he was spotted by Burnley in 1931 and moved to Turf Moor, but scored just one goal in seven appearances in a three-year spell before signing for Nottingham Forest in 1934. Chances were even more limited at the City Ground - he played just twice, scoring once, before moving to Rotherham United in 1935 for what turned out to be the most successful spell of his career: 107 appearances and an impressive 44 goals in a three-year stay. He netted 14 goals for The Millers in the season before joining Argyle, and the season prior to that he was the club's leading scorer with 20. During his time at Millmoor he also became one of few Millers to score in six consecutive games.

Despite his prolific form, Rotherham agreed to allow his transfer to Argyle in 1938. Part of the reason would have been finances; United were formed in 1925 from the merger of Rotherham County and Rotherham Town, and the new club's first two decades were marked by struggling finances and the need to trade and sell players to stay afloat. Smith had actually been spotted by manager Jack Tresadern during his time as as secretary-manager of Tottenham Hotspur - he had gone to watch another Rotherham player on three occasions but had been impressed by Smith, both for his goal-scoring prowess and also his ability to create chances for others.

A promising start to his career in green - five goals in his first 12 appearances - was cut short when Argyle withdrew from the Football League as a results of the effects of the Second World War, although he did return at the age of 33 to play a further eight games for Argyle in the Football League South campaign of 1945-46.

Greens on Screen is run as a service to fellow supporters, in all good faith, without commercial or private gain.  I have no wish to abuse copyright regulations and apologise unreservedly if this occurs. If you own any of the material used on this site, and object to its inclusion, please get in touch using the 'Contact Us' button at the top of each page. Search facility powered by JRank Search Engine.Milonic UK time at page load: 19 January 2021, 15:31.