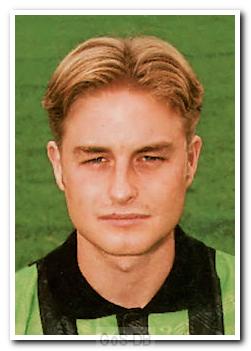 Searching for a skilful winger to add sheen to his newly relegated squad, manager Peter Shilton borrowed Craig Skinner from Blackburn Rovers in August 1992 - initially on a one-month loan deal. Skinner, who had been with Blackburn since signing as a schoolboy, was outstanding on his debut for Shilton's men - catching the eye on the right wing in a mouth-watering 3-0 defeat of Bradford City. But despite his hugely promising baptism, Skinner's Home Park career would never quite hit the same heady heights.

Just a few months after signing permanently in the deal that took Argyle captain Nicky Marker to Ewood Park, Skinner's brother was involved in a life-threatening car accident in Australia. Upon his return from that enforced five-week leave of absence, Skinner picked up a serious ankle injury in an FA Cup match at Ipswich and was out for nine months. He made occasional appearances during the playoff season of 1993/94, but by then he had fallen out with Shilton and his assistant John McGovern. The managerial duo's exit saw Skinner flourish in the relegation season of 94/95, but the arrival of Neil Warnock saw most of Shilton's signings shipped out - and Skinner was no exception. He joined Wrexham in the summer of 1995, where he spent four years, before seeing out his career at York, Leigh and Northwich. He went on to work for the LFE (League Football Education), where he managed educational programmes for football apprentices.