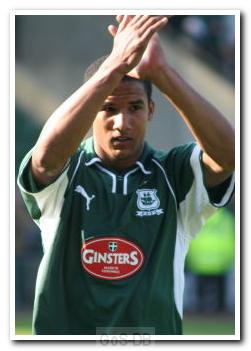 Came from: Chelsea   Went to: Chelsea

Sinclair spent an exciting four month spell at Argyle on loan from Chelsea. Having started his career in the Bristol Rovers youth system he made his debut aged just 15 and a few months later was signed by Chelsea, the fee being decided by a tribunal. He made his debut for Chelsea 18 months later but with his first team chances clearly limited joined Argyle on loan, whose manager Ian Holloway had been in charge at Bristol Rovers when Sinclair was in the youth set-up.

During his short stay at Home Park he became a firm favourite of the Green Army, with some exciting displays including two wonder goals that thrust him into the national headlines. After returning to Chelsea he made his first start for the club before the end of the 2006-07 season but with his chances again limited during the following campaign he moved to QPR on loan. Over the next two years he also had loan spells with Charlton Athletic, Crystal Palace and Birmingham City, rarely being involved with the Chelsea first team, before joining Wigan Athletic on a season-long loan.

Sinclair played just 14 times (1 goal) for Chelsea in his three years on the books at Stamford Bridge, but made 74 appearances (9 goals) on loan at five other clubs. In the summer of 2010 there were suggestions of strong interest from Ian Holloway again, who by this time was manager of Blackpool, but a move did not materialise. Sinclair's time in west London finally came to an end in August 2010 when, at the age of 20, he signed a three-year contract with Championship side Swansea City for a fee of £500,000. He played a big part in his new club's march to the play-offs in his first season with the Swans, and in a pulsating final at Wembley against Reading, scored a hat-trick to win a place in the Premier League. At the end of the following season, after 36 goals in 90 games for Swansea, Sinclair was selected for the Great Britain team at the 2012 London Olympic Games. He played four matches in the 2012 games and scored against the UAE in the second match, at Wembley.

With a year remaining on his contract, the first game of the 2012-13 season proved to be Sinclair's last for the Welsh side; on the last day of the August transfer window, he was snapped up by Manchester City on a four-year deal for an initial fee of £6.2 million. He made 13 substitute appearances but only three starts in his first season for City, which was followed by a season-long loan at West Bromwich Albion, where he only managed 11 appearances and failed to score. Back at the Etihad Stadium for the 2014-15 season, he accumulated just 20 minutes of play in three substitute appearances before joining Aston Villa at the end of January 2015, on a loan deal for the remainder of the season, which was converted to a £2.5 million transfer that summer.

Greens on Screen is run as a service to fellow supporters, in all good faith, without commercial or private gain.  I have no wish to abuse copyright regulations and apologise unreservedly if this occurs. If you own any of the material used on this site, and object to its inclusion, please get in touch using the 'Contact Us' button at the top of each page. Search facility powered by JRank Search Engine.Milonic UK time at page load: 21 January 2021, 07:19.