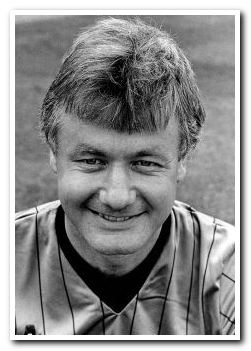 Player of the Year in 1982, Sims was a hardworking centre-forward who won over the Argyle fans with his committed performances. His career began at Derby County and although he only played three times for the Rams, one of those appearances was as a substitute in the European Cup Semi-Final against Juventus. He had loan spells with Luton Town, Oxford United and Colchester United before joining Notts County in 1975. Three years later he was signed by Bobby Saxton for Exeter City and followed his manager to Home Park the following year. After four seasons with Argyle he moved to Torquay United before re-joining Exeter City, finally ending his professional career with a spell as player-manager back at Torquay. He went on to play for Saltash United and Waldon Athletic.

Greens on Screen is run as a service to fellow supporters, in all good faith, without commercial or private gain.  I have no wish to abuse copyright regulations and apologise unreservedly if this occurs. If you own any of the material used on this site, and object to its inclusion, please get in touch using the 'Contact Us' button at the top of each page. Search facility powered by JRank Search Engine. Hover facility courtesy of Milonic. UK time at page load: 23 April 2021, 02:41.