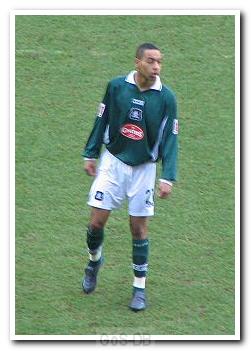 A product of the Oxford United youth system, Blackstock transferred to Southampton before playing a first team game. Despite establishing himself in the Southampton squad, he was twice sent on loan, first to Argyle and then to Derby County, and impressed with his goalscoring ability during both moves. Still unable to win a regular place for Saints, he was sold to Queens Park Rangers. His form for QPR led to an England under-21 call-up and he scored 32 goals in 116 games across three seasons there before joining Nottingham Forest in 2009, initially on loan.

Despite having represented England at international youth level, Blackstock went on to play for the Antigua and Barbuda national team, qualifying through his grandfather, who was born on the island of Antigua. A proven Championship striker, he signed a new four and a half-year contract with Forest in January 2013. In the following October he was loaned to Leeds United but this spell was curtailed due a season-ending knee injury. He also missed the start of the 201415 campaign as he struggled to shake off his knee problem but within a few months was back as a regular at the City Ground.