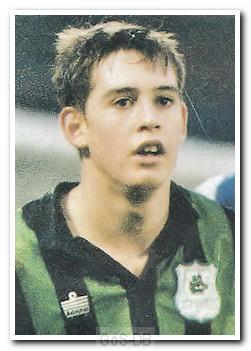 Having a famous father at the same club can often be a heavy cross to bear for young footballers, and so it proved for Samuel Shilton, the youngest son of then Argyle boss Peter. With the Pilgrims enduring a nightmare 1994/95 campaign, it was chairman Dan McCauley who called for the promotion of winger Sam from the club's reserves. But McCauley had to twist the arm of his manager, who was wary of nepotism claims, to throw his young son into the unfolding relegation dogfight.

The 16-year-old Sam duly made his senior debut in a 2-1 home win against Bournemouth in December 1994. But when his father was suspended over a tax row in January 1995, Sam was reluctant to stay at the club and he joined Coventry City for £125,000 later that year. He failed to make the grade in the Midlands, and went on to make more than 130 appearances in the lower leagues with Hartlepool and Kidderminster.