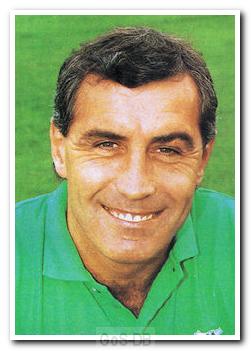 Peter Shilton OBE is without doubt one of English football's genuine legends. He won 125 full international caps for his country, played in three World Cups and won numerous honours at club level in a career that spanned 30 years. It all began began at Leicester City, where he took over from World Cup winner Gordon Banks, and he also had lengthy spells at Stoke City, Nottingham Forest (winning two European Cup winners' medals), Southampton and Derby County.

The appointment of the world-famous star as Argyle player/manager in February 1992 caused shockwaves in Plymouth and, for once, the eyes of the world's media were focused on Home Park. England's record caps holder may have been embarking on a new career as a rookie manager, but he immediately signalled his intent to extend his goalkeeping career as he strived to reach the 1,000-mark for League appearances.

After watching a handful of games from the dugout, Shilton finally took to the pitch on April 4 at Charlton Athletic, and was a major factor as the struggling Pilgrims earned a point in a 0-0 draw. At the age of 42, his cat-like reflexes were certainly on the wane, but his obsessive levels of concentration were as sharp as ever and some of his early performances between the Argyle posts earned rave reviews. However, the man who had earned a reputation for bawling criticism at world-class defenders soon found himself unpopular with his lower-league players who inevitably struggled to live up to their manager's zealous quest for perfection.

Furthermore, Shilton simply could not get to grips with the newly instigated back-pass law, and an anticipatory groan from the terraces soon accompanied his every attempt to clear the ball upfield. The sparkling form of youngster Alan Nicholls as season 1993/94 unfolded gave Shilton the ideal opportunity to hand over the gloves, which he did to his great credit.

All told, the England legend wore the Argyle shirt 43 times and, with the odd exception when his ageing limbs betrayed his advancing years, performed immaculately.

After vacating the Home Park hot-seat in 1995, he once again donned the gloves to play for Wimbledon, Bolton Wanderers, Coventry City, West Ham United and Leyton Orient, where he finally reached the 1,000 League appearances mark.