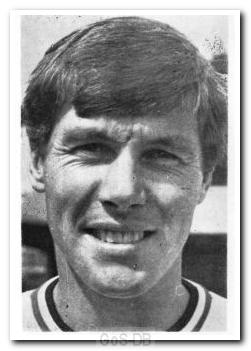 Shepherd started his career with his local club, Nottingham Forest, but left without appearing for the first team, joining Coventry City. Unable to break into the first team at Highfield Road he was sent on loan to Torquay United. An impressive six goals in 14 games at Plainmoor saw Torquay attempt to make the deal permanent, but Coventry recalled the striker to give him a chance to prove himself in the First Division. The following season they accepted Argyle's £9,000 offer and Shepherd spent the next two years at Home Park. Playing primarily on the right-wing, he had some short spells in the first team without ever becoming a regular starter. Following his release he played for Nuneaton Borough.

Greens on Screen is run as a service to fellow supporters, in all good faith, without commercial or private gain.  I have no wish to abuse copyright regulations and apologise unreservedly if this occurs. If you own any of the material used on this site, and object to its inclusion, please get in touch using the 'Contact Us' button at the top of each page. Search facility powered by JRank Search Engine.Milonic UK time at page load: 21 January 2021, 08:11.