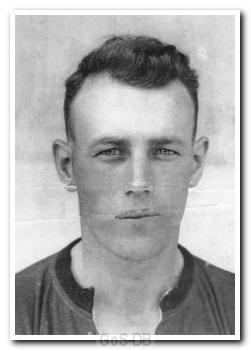 Black was born in Mossend in North Lanarkshire and started playing locally for Strathclyde. The Scottish defender arrived at Home Park from Arsenal in 1933 after a single appearance for The Gunners in the FA Cup, a humiliating defeat at Walsall, where he conceded a penalty which led to one of Walsall's two goals. The great Herbert Chapman was not impressed, vowing he would never wear red and white again. Black stayed with Argyle for seven seasons and established himself as a solid and reliable defender, making over 150 appearances at left-half, usually in front of Jimmy Rae. He moved to Southend United in 1939, but played just three times for the Essex side before the outbreak of the Second World War, which brought League football and thus his career to an end.

Greens on Screen is run as a service to fellow supporters, in all good faith, without commercial or private gain.  I have no wish to abuse copyright regulations and apologise unreservedly if this occurs. If you own any of the material used on this site, and object to its inclusion, please get in touch using the 'Contact Us' button at the top of each page. Search facility powered by JRank Search Engine.Milonic UK time at page load: 22 January 2021, 12:39.