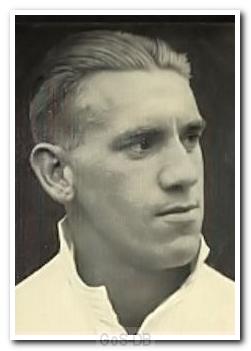 Note: Not to be confused with Charles Sargeant, who played for Argyle in the last season before the war.

Sargent was one of 27 in the guest category. Born in Islington, the right-winger started his career with Tufnell Park before being spotted in February 1934 by Tottenham Hotspur, who took him on as an amateur in conjunction with a spell with their nursery club, Northfleet United, with a view to signing professional terms within six months. This he did, agreeing full terms with Spurs in August 1934. Renowned for his blistering pace, he ousted John McCormick from the 1935-36 Spurs side but was back in the reserves the following season. In the five years he was with the club until the outbreak of war, he played in 96 league matches and scored 25 goals, and in all forms of competition, including subsequent wartime leagues, he played 144 times and scored 39 goals for the North London club.

Despite breaking a leg when playing for Spurs against Chelsea in 1940, he nevertheless guested for Southend United, Aldershot, Burnley, Fulham, Hull City, Middlesbrough, York City and Argyle in the wartime years. At the end of the war his contract at Spurs was cancelled by mutual consent, allowing him to sign for ambitious Southern League Chelmsford City. He went on to make 88 appearances and scored 22 times for the Essex side across three years before tragedy struck.

On 22nd August 1948 in New Barnet, North London, Fred Sargent died suddenly at the age of 36 when playing in a practice match for Chelmsford. Following his untimely death, said to be due to a gastric ailment, Chelmsford played Spurs in a memorial match on 20th September 1948 at Chelmsfords New Writtle Street ground in order to raise funds for his widow. A crowd of 7,659 watched the match, which Spurs won 5-1, and raised £1,389 for his wife.