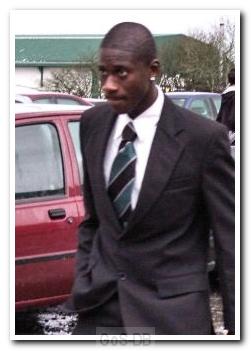 Came from: Cadiz   Went to: Released

A former England under-18 international, Samba joined Argyle after he was released by Spanish side Cadiz. He began his career at Millwall and as a teenager attracted interest from many clubs. At one stage every major English club was linked with him as a 16-year-old and he was once rung on the school bus on the way home by Michael Owen, encouraging the then Millwall prospect to sign on at Liverpool.

He was born in Banjul, in Gambia and moved to London with his family at an early age, coming to prominence as a 13-year-old after netting 132 goals in 32 games for his boys club - St Joseph's Academy in Blackheath, London. With the larger clubs prevaricating, Millwall moved in to secure the signature of a young man tapped to lead Englands assault on the 2006 World Cup. Samba duly rose through the England youth international ranks and after a week-long trial at Liverpool, Gerard Houllier personally intervened (prompting the Owen phone call) in a bid to force through a transfer, but Millwall refused to part  reportedly rejecting a £2 million bid.

Quite what impact such manoeuvrings could have had on a still young man can only be imagined but life - and his form - were never quite the same thereafter. After his near-miss with Liverpool his career did not progress as expected. He was later released by Millwall without making a first team appearance and had trials at Coventry City, Leeds United and West Bromwich Albion before joining Cadiz. He spent a season on loan to Malaga before Cadiz also released him.

He made little impact at Home Park but did memorably score the winner on his debut, with practically his first touch (a great, leaping back-post header) after coming on as a substitute at the Ricoh Arena, Coventry in September 2006 for what remains his sole Football League goal on what was his Football League debut. Whilst at Home Park he had a spell on loan at Wrexham (3 appearances without scoring) before being released by Ian Holloway. He subsequently joined Finnish Veikkausliiga (Premier League) side FC Haka and did go on to win full international recognition with the Gambian national side, despite playing at every age-range up to under-20 for England (he won 22 caps across four age ranges). He went on to win 4 full caps for Gambia and played in their FIFA 2010 World Cup qualifier against Liberia in September 2008, after coming on as substitute. He also scored for The Scorpions, netting (another headed goal) the opener in a 2-1 away win in Tunisia in January 2010.

He later went on to play for second division Panetolikos in Greece in 2010. After leaving Greece he had a trial with Forest Green Rovers, Alfreton Town and then Mansfield Town before then moving back to Scandinavia to join Norwegian second division FK Tønsberg in 2012 though he has since been released.

In a strange indictment of modern football and indeed life, Samba is probably more known for his 'name' than his actual playing career after his virtual version achieved cult, legendary status on the 2001-02 edition of the 'sim' (simulation) computer game 'Championship Manager' (the precursor to 'Football Manager'). His virtual fame was captured in the book "Football Manager Stole My Life: 20 Years of Beautiful Obsession" by Kenny Millar. Within Gambia he also formed the Cherno Samba Academy of Football, which is associated with the professional team Samger, who were promoted to play in the Gambian Championnat National D1 in 2006.

In July 2015 it was announced that Samba had retired from the professional game at the age of 29, having failed to recover from an injury received when playing for FK Tønsberg. In an interview with BBC World Service he said "I hope people remember me in terms of my playing career" (rather than for the legend of his virtual self).