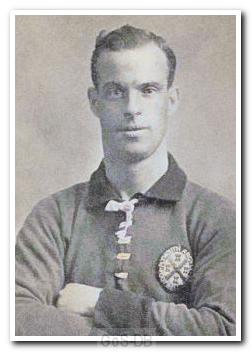 Rutter was born in South Shields in 1887 and began his career in his hometown with South Shields Parkside. In 1909 he joined Bradford City, but made just three first team appearances before returning to the North East to play for South Shields. In 1910 he signed for Barnsley and played 16 games for the club, scoring five goals. He moved to Exeter City in time for the 1911-12 season and the following year was ever-present in their Southern League campaign.

In July 1913 Rutter joined Argyle for a fee of £150 and over the next two years featured regularly for the reserves, assisting the first team when required. The club handbook stated that he "is a keen and lively player with plenty of dash, and he distributes his passes well." The outbreak of war brought Rutter's career to an end; although he was still on the club books at the end of the conflict he chose to stay in his wartime role with the Royal Naval Auxiliary.

Greens on Screen is run as a service to fellow supporters, in all good faith, without commercial or private gain.  I have no wish to abuse copyright regulations and apologise unreservedly if this occurs. If you own any of the material used on this site, and object to its inclusion, please get in touch using the 'Contact Us' button at the top of each page. Search facility powered by JRank Search Engine.Milonic UK time at page load: 18 January 2021, 17:17.