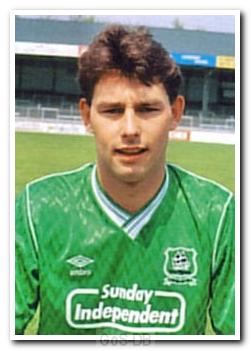 Rowbotham was born in Cardiff but came through the youth ranks at Argyle, making his debut in December 1984. Darran - often misspelt as Darren, even in home programmes - made occasional up-front appearances over four seasons before moving to Exeter City, where he enjoyed a prolific spell in Citys 1989-90 Fourth Division Championship winning team. He scored 58 goals in 142 games at St James' Park before a serious knee injury kept him out of football for a year. A peripatetic career then followed with spells at Torquay (joining the list of players to have played for all three Devon clubs), Birmingham City, Mansfield Town (loan), Hereford United (loan), Crewe Alexandra and Shrewsbury Town before returning to Exeter on loan in 1996. A permanent move then followed with a return of 37 goals in 118 games. A brief loan spell at Leyton Orient in 1999 was Rowbotham's last move before seeing out his career with Weymouth. Brother Jason also played for Argyle.

Greens on Screen is run as a service to fellow supporters, in all good faith, without commercial or private gain.  I have no wish to abuse copyright regulations and apologise unreservedly if this occurs. If you own any of the material used on this site, and object to its inclusion, please get in touch using the 'Contact Us' button at the top of each page. Search facility powered by JRank Search Engine.Milonic UK time at page load: 21 January 2021, 09:05.