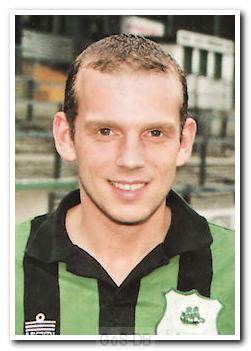 The diminutive Southampton-born forward started his career on a YTS scheme with rivals Portsmouth but found the breakthrough difficult to make at Fratton Park. Having signed professional terms in 1988, Ross spent five years with Pompey but made only four League appearances, all as substitute.

In August 1993 he signed for Exeter City for £60,000, making 28 appearances and scoring nine times, and was then lured to Home Park in November 1994. He was on Argyle's books for two seasons but his only goals came in his home debut: a brace in the FA Cup 2nd Round against AFC Bournemouth in December 1994.

Unable to live up to that early promise, he was loaned back to Exeter City in November 1995 to notch up a further seven appearances and two goals for the Grecians. At the end of that season he left Home Park permanently to continue playing in green with Bognor Regis Town.

Greens on Screen is run as a service to fellow supporters, in all good faith, without commercial or private gain.  I have no wish to abuse copyright regulations and apologise unreservedly if this occurs. If you own any of the material used on this site, and object to its inclusion, please get in touch using the 'Contact Us' button at the top of each page. Search facility powered by JRank Search Engine.Milonic UK time at page load: 21 January 2021, 08:15.