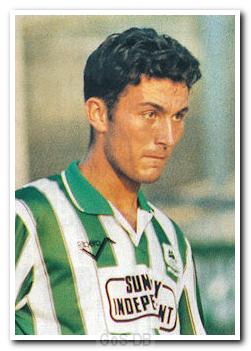 Came from: Scarborough   Went to: Hereford

A young Middlesbrough-born striker who Argyle picked up from Scarborough, Robinson showed glimpses of a bright future at Home Park. He made his debut as a substitute in a 1-1 draw against his hometown club, but really made his mark in a 3-2 win against Millwall at Home Park, scoring two goals in rapid succession. However, despite scoring the winner in a 1-0 home win against Bristol City to make it three goals in six games, the lanky forward was never given an extended run in the team. He was allowed to join Hereford United at the end of the season, perhaps justifiably complaining that he had never been given a chance to prove himself at Home Park. He scored four goals in seven games for Hereford, but sadly was forced to retire through injury while still in his early 20s.