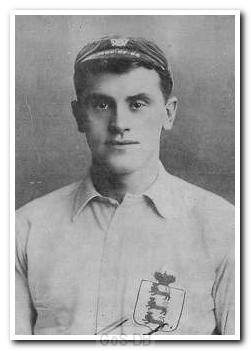 Came from: Southampton   Went to: Millwall

Robinson was born in Derby in 1870 and played for local sides Derby St Neots and Derby Midland before moving to Lincoln City in 1889, where he was in the team that won the Midland League in 1890. He then returned home to play for Derby County, during which time he also played third base for Derby at baseball.

A local industrialist, Sir Francis Ley, had fallen in love with the sport of baseball on a visit to the USA and set up an English league in 1890. The original four teams were all based on football teams - Derby County, Preston North End, Aston Villa and Stoke. Ley also gave the use of a sports field attached to his Derby factory, The Baseball Ground.

Robinson played 163 times for County and helped them finish as runners-up in the First Division in 1895/96. He also won the first of eleven England caps whilst with the club. In 1897 he joined New Brighton Tower, but stayed for just one season before moving to Southampton. Over the next five years he made more than 100 appearances and helped the Saints win the Southern League three times, also reaching two FA Cup Finals.

Throughout his career Robinson was renowned for playing a notable role in introducing modern goalkeeping techniques and training methods to the game. In 1903, the directors of Argyle decided the club should turn professional and instructed manager Frank Brettell to recruit a squad of first-class players. Robinson, arriving at Home Park with a wealth of experience, was perhaps the cream of the crop. He was Argyle's first-choice between the sticks for the next 18 months but moved on to Millwall Athletic in 1905 after losing his place.

Two years later he returned to the West Country and had brief spells with Exeter City and Green Waves, before spending the last three years of his career with Stoke. Following his retirement in 1912 he emigrated to the United States where he played for and managed New York State side Rochester City.