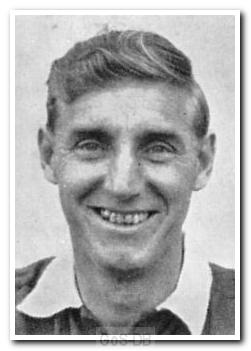 Robertson was a right-back who broke into the team as a centre-half following the retirement of Jack Chisholm. He had arrived at Home Park from Gairdoch Juniors in Scotland following a trial match when he was in the RAF, based at Salisbury. He played just twice in the first team during his first three years at the club, but built up a reputation as a tough-tackling defender as he became a regular member of the team over the following ten years, eventually reverting to his favoured full-back position.

After retiring from League football, Robertson was appointed player-manager of Falmouth Town and then became groundsman at Plymouth College. He later returned to the club to run its new youth hostel (Elm Cottage). The youth scheme was phased out after Tony Waiters' departure, but Robertson returned again, this time as Home Park's groundsman in the 1980s.

I was in the school 1st XV when George was groundsman at Plymouth College, and he turned out to be a bit of a guardian angel on my last day. The night before, the team had held its annual get-together at the home of our coach, Ted Mercer (Ted was also well-known at the time for his post-match summaries of Argyles home games on Saturdays Sports Report). Ted had a neat line in home-made wine, and I took on board a little too much. Consequently I had to spend the evening at his house, and in the morning George Robertson was kind enough to give me a lift to my house in far-off Plympton, wait for me to change and drive me back to school again, where I said goodbye to the school (I was Head Boy) with the mother of all headaches. George was a true gentleman, as well as a guardian angel.

Greens on Screen is run as a service to fellow supporters, in all good faith, without commercial or private gain.  I have no wish to abuse copyright regulations and apologise unreservedly if this occurs. If you own any of the material used on this site, and object to its inclusion, please get in touch using the 'Contact Us' button at the top of each page. Search facility powered by JRank Search Engine.Milonic UK time at page load: 22 January 2021, 12:48.