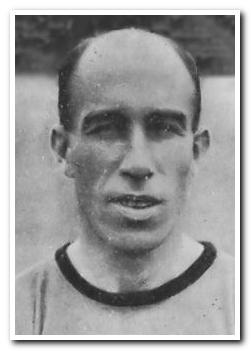 Born in Motherwell, Robbie was playing amateur football for Bathgate in Scotland when signed by Bury in 1921. Spending 13 years as an outside-right for the Gigg Lane side, he clocked up 420 appearances and scored a impressive 102 goals. He was with Bury during their greatest year, when they achieved their highest ever finish: 4th in the top flight in 1926. In 1935, just when it seemed he would be a one-club man, he left for Home Park, but played just three games for Argyle early in the 1935-36 season. A few weeks later he played one game for Manchester United, and some records suggest he was loaned to United for that match, a defeat for the Red Devils at Southampton. Moving along the south coast, he wound down his career with Margate.

Greens on Screen is run as a service to fellow supporters, in all good faith, without commercial or private gain.  I have no wish to abuse copyright regulations and apologise unreservedly if this occurs. If you own any of the material used on this site, and object to its inclusion, please get in touch using the 'Contact Us' button at the top of each page. Search facility powered by JRank Search Engine.Milonic UK time at page load: 21 January 2021, 08:56.