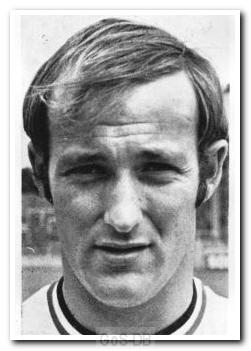 Reynolds began his career as an apprentice with Argyle, signing professional terms in February 1965, a month after making his first team debut at just 16 years old, and his teenage form led to England caps at youth level. A big, powerful man, he started out as a forward but moved into midfield to great effect. Despite making 140 appearances over six years at Home Park, he achieved few extended periods in the first team, and when he found himself out of the side in 1970, moved to Yeovil Town on loan. The following summer he transferred to Portsmouth where his career was revived and he played more than 140 times over the next five seasons. After retiring he played for Carshalton Athletic and had spells as player-manager at Chichester City and Petersfield Town.

On a bitterly cold Wednesday night in January 1965 what could be more tempting than a half an hour's walk up Wolseley Road to see Argyle play Bugle in the South Western League. I succumbed and was lucky enough to witness Richard Reynold's nine-goal exploit. The Herald said the attendance was 92 so for the first and only time I was over 1% of the crowd at Home Park! It was, of course not a very difficult game for the Greens but Richard Reynolds was strong, determined and persistent - he struck the ball sweetly and his control was good for a big lad on a bone hard pitch. There were some cracking strikes. Three days later Richard made his senior debut in the FA Cup against Derby County - 4-2. His first Football League goal came against Crystal Palace at Home Park a fortnight later.

1964-65 was, as they say, 'a funny old season' for Argyle. After almost getting relegated the previous season by the time the Manchester City '3-2 game' arrived in November with 'that penalty' grabbing the headlines they were looking genuine promotion candidates. In fact that was as good as it got with only five more wins to the end of the season, finishing 15th, which nevertheless was progress. The run to the League Cup semi-final was exciting with Johnny Newman's winner against Northampton Town in the quarter-finals a highlight. Northampton were on their way to the First Division that season; Argyle, of course, thumped them 5-2 just to show what might have been. Richard Reynolds scored one of the goals. He must have been pleased to have broken into the first-team, scored a few goals and looked the part in Division 2...and it all started against Bugle when I was one of the 92!

Greens on Screen is run as a service to fellow supporters, in all good faith, without commercial or private gain.  I have no wish to abuse copyright regulations and apologise unreservedly if this occurs. If you own any of the material used on this site, and object to its inclusion, please get in touch using the 'Contact Us' button at the top of each page. Search facility powered by JRank Search Engine. Hover facility courtesy of Milonic. UK time at page load: 23 April 2021, 04:27.