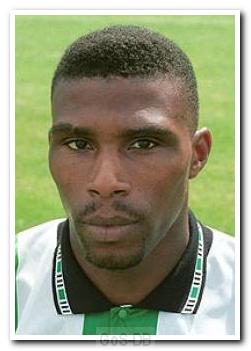 David Kemp must have thought all his Christmasses had come at once when Dan McCauley took over as Argyle chairman and immediately bestowed a considerable transfer warchest on his manager; considerable compared to the previous Board anyway. Kemp shelled out almost &pound400,000 on two players in November 1991, Dave Regis and David Smith, but neither enjoyed much success in Devon.

Regis had won promotion to the top flight with Notts County just months before Kemp made a successful &pound200,000 bid for the big striker, who had fallen out of favour at Meadow Lane. Regis had a decent record in the second tier, but he simply could not get going in his new surroundings. It took him eight games to notch his first goal, by which time the supporters had already turned on him. The arrival of Peter Shilton saw Regis temporarily partnered with Kevin Nugent, but he was farmed out on loan to Bournemouth in August 1992. Two goals in a month at Dean Court seemed to give Regis a new lease of life, and he scored five times in seven matches back in a green shirt, including three in the two-legged League Cup tie against Luton Town. But despite his Lazarus-like return, Shilton had other plans and Regis was sold to Stoke City for &pound150,000 in October 1992.

Greens on Screen is run as a service to fellow supporters, in all good faith, without commercial or private gain.  I have no wish to abuse copyright regulations and apologise unreservedly if this occurs. If you own any of the material used on this site, and object to its inclusion, please get in touch using the 'Contact Us' button at the top of each page. Search facility powered by JRank Search Engine. UK time at page load: 10 April 2021, 12:54.