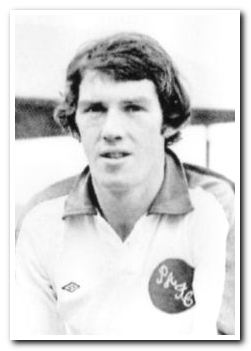 The other half of the great striking duo of the 1970s, Billy Rafferty formed a formidable partnership with future England international Paul Mariner. Playing for eight different clubs would suggest that Rafferty was a 'journeyman' footballer, but Home Park was his calling. His long career started at Coventry City and he had two years with Blackpool before his move to Home Park. Knee trouble blighted his first season with the Pilgrims but he returned to action the following year determined to make up for lost time.

Rafferty was powerfully built and a strong runner, yet surprisingly mobile, even graceful. He and Mariner immediately formed an almost telepathic understanding of each other's game. They just had the knack of being in the right place at the right time for each other, and in that Dream Team promotion season, scored goals for fun. The fans were aghast the following season when he was sold to Carlisle for a measly &pound20,000 after just two years at Home Park. He went on to play for Wolverhampton Wanderers, Newcastle United, Portsmouth and Bournemouth before moving to Portugal and playing for Sporting Club Farense and Loultanos.

Greens on Screen is run as a service to fellow supporters, in all good faith, without commercial or private gain.  I have no wish to abuse copyright regulations and apologise unreservedly if this occurs. If you own any of the material used on this site, and object to its inclusion, please get in touch using the 'Contact Us' button at the top of each page. Search facility powered by JRank Search Engine.Milonic UK time at page load: 16 January 2021, 20:01.