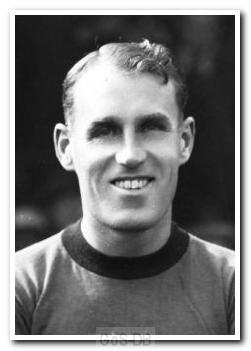 Note: Rae's birthplace was not Blackmill, Argyllshire, as is often documented - see the 'Your Contribution' section for more details.

1. Came from: Partick Thistle   Went to: Career interrupted by WW2

Rae was born in the village of Skinflats, near Falkirk in Stirlingshire, and began his football with Stirlingshire side King's Park, later to become Stirling Albion. His next club was Partick Thistle, which triggered a move to Home Park - along with John Simpson - after both impressed while playing for Thistle against Argyle in a benefit match for fellow Scot and Pilgrim, Alec Hardie.

The left-back was a defender ahead of his time; he always preferred to pass the ball away from danger rather than take the safety first option of a hefty clearance. In eight seasons he made nearly 300 appearances for the club, until the Second World War brought his career to a premature halt.

Remaining loyal to Argyle, he made two further appearances in the interim Football League South season of 1945-46 and was then appointed as Assistant Manager. He filled the role until his elevation to the hot seat early in the 1947-48 season, taking over from Jack Tresadern, a post he held for eight years. Although the club was relegated in 1949-50, he led Argyle to promotion to Division Two in 1951-52 and to their equal-highest finishing position of fourth in that Division in 1952-1953. Another legacy was that he was responsible for signing players of the calibre of Jack Chisholm and Neil Dougall, amongst others. Despite his successes, he also spent much of his managerial career fending off the threat of relegation and, mid-way through the 1954-1955 season, he was dismissed. He left Plymouth to manage a pub in Solihull, but sadly died in July 1958, just three years after leaving the club.

Jimmy Rae's birthplace is often said to be Blackmill, with some books and websites suggesting it was Blackmill, Argyllshire, or even Aberdeenshire. However, the Statutory Records of Births in Scotland, accessed through the ScotlandsPeople website, reveals just one birth for James Clarkson Rae at this time - he was born in Skinflats (spelt Skinflatts on the registration document) in the district of Bothkennar, Stirlingshire, a small village that now lies within the Falkirk council area. Close by are the towns of Falkirk, Stenhousemuir and Grangemouth, and some ten miles away is Stirling, where Rae's first club, King's Park, used to play.

So where did 'Blackmill' come from? A paper entitled 'Material for a Place-Name Survey of East Stirlingshire' (download available from the Scottish Place-Name Society website, here: http://www.spns.org.uk/CtStirling.html) lists a place called Blackmill at National Grid Reference NS889830, which is about a mile from Skinflats. Whilst Blackmill is not marked at this location on today's maps, it seems too much of a coincidence that within a stone's throw of the grid reference is Blackmill Crescent in the village of Carron (on Falkirk's northern edge), and very close by is a pub, now called the Shore at Carronshore, but formerly the Blackmill Arms.

Greens on Screen is run as a service to fellow supporters, in all good faith, without commercial or private gain.  I have no wish to abuse copyright regulations and apologise unreservedly if this occurs. If you own any of the material used on this site, and object to its inclusion, please get in touch using the 'Contact Us' button at the top of each page. Search facility powered by JRank Search Engine. Hover facility courtesy of Milonic. UK time at page load: 22 April 2021, 21:08.