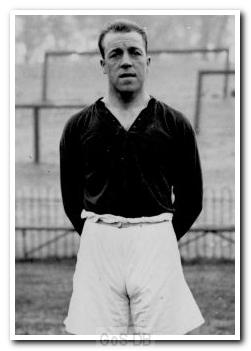 Pullen was born in the village of Victoria in Monmouthshire, a workers' village literally within the steel works of Ebbw Vale. He joined the Pilgrims from his first club, Ebbw Vale, in 1924 and became a central figure in the Argyle team, ending with one short of a double-century of appearances in 11 first team seasons. He was an imposing centre-half who was perfectly built for the position and was known for never shirking a header or tackle, a reputation that earned him one international cap for Wales, against England in 1926. His football career ended ten years after arriving at Home Park, with Argyle his only professional club.

Hello. My family has recently buried my father, James O'Brien, after succumbing to Alzheimers. He has been buried in Ebbw Vale cemetery. Whilst recently returning with my mother, we had a walk around and came upon my mother's auntie's grave, who was Theresa Pullen, and on the headstone is her husband, John Pullen, who played for Plymouth Argyle and Wales. There is no year of death on yours or Wikipedia's page but his headstone says 1969. I wasn't aware of John and his football history so nice to find out. Thanks, Vincent.

Greens on Screen is run as a service to fellow supporters, in all good faith, without commercial or private gain.  I have no wish to abuse copyright regulations and apologise unreservedly if this occurs. If you own any of the material used on this site, and object to its inclusion, please get in touch using the 'Contact Us' button at the top of each page. Search facility powered by JRank Search Engine. Hover facility courtesy of Milonic. UK time at page load: 22 April 2021, 22:21.