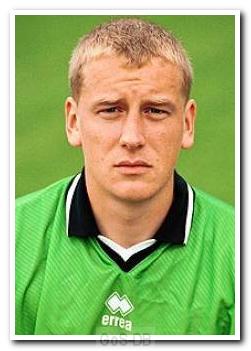 Came from: Ayr   Went to: Halifax

Kevin Hodges signed Power on a free transfer in the summer of 1998, hoping the 26-year-old would recapture the form that had once made him such a bright prospect at Norwich City. He made the breakthrough at Carrow Road as an 18-year-old, scoring 10 top-flight goals over three seasons and appearing on 13 occasions for the Republic of Ireland U21 side. However, Power fell out of favour at Norwich and, after a series of unsuccessful loan moves, eventually joined Bradford City.

By the time he turned up at Home Park, he had racked up 10 clubs in England and Scotland, and it didn't take Argyle fans long to work out why. Power pulled on the green shirt 19 times all told, but failed to find the net once and was allowed to join Halifax Town at the turn of the year. Shortly before he left Home Park, some bright spark had decided to make him 'Mr December' on the club's official 1999 calendar - meaning Argyle fans were forced to endure a whole month of looking at Lee Power on their walls a full year after he had left the club.