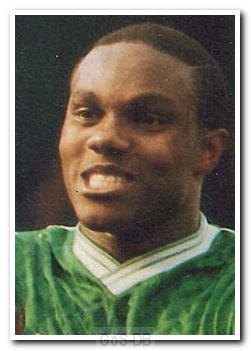 Nottingham-born Plummer served his apprenticeship with Forest and made his debut for Brian Clough in the 1981-82 side. The right-winger's relationship with Clough was somewhat soured when, perhaps naively, he agreed to play in an 'Apartheid Tour' to South Africa organised by Jimmy Hill in 1982. The tour party, made up mostly of players coming to the end of their days in football, were accused of 'tokenism' for the inclusion of Plummer, who was at the start of his career. Clough released Plummer shortly after, but perhaps showing some forgiveness, later re-signed him for Forest.

Moving the short distance to Chesterfield for the 1982-83 season, Plummer soon came to the attention of more illustrious neighbours, Derby County. He arrived at the Baseball Ground for the 1983-84 season, playing 27 times before he was on the move again, this time to Barnsley. A longer than average stay at Oakwell - 3 years - produced 7 strikes in 56 games before Clough re-signed him for Forest.

Plummer failed to make a League appearance for Forest in the 1986-87 season and perhaps needing to earn further penance from Clough, was loaned to Lahden Reipas in Finland, where he played 20 times in 1987. On his return, he made eight further appearances for Forest before signing for Argyle in September 1988.

He is perhaps best remembered for rattling the post with a ferocious swerving shot in a scintillating home debut in the 4-0 win against Stoke City that month. His solitary Argyle goal came in the 3-0 win at home to Brighton in December of the same year. On leaving Home Park he joined Chesterfield for his second spell, making a further 71 appearances before moving into non-league football with Gainsborough Trinity. As well as his spell in Finland, Plummer also played for Derry City in Ireland and added several non-league clubs to his CV as his career wound down, including Shepshed Albion, Corby Town, Nuneaton Borough, Birstall United, Grantham Town, Arnold Town, Shepshed Dynamo and Kirby Muxloe. On retiring, Plummer stayed local to the East Midlands and managed Bilborough, Arnold Town's reserves and Gedling Miners' Welfare.