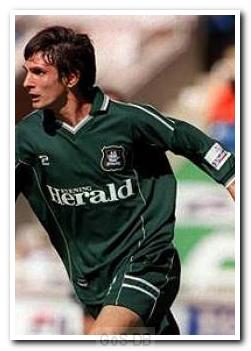 'Bessie' was a product of the Argyle youth set-up, progressing through the ranks to play over 150 games for the first-team, primarily at left-back. His best attribute was his pace; he was a defender with a natural athleticism who could overlap down the wings, but despite getting forward on numerous occasions he never managed to find the back of the net.

Despite being offered a contract extension by Paul Sturrock, Beswetherick chose to leave on a free transfer and in the summer of 2002 joined Sheffield Wednesday, where he played 16 times in two years. During his first season, manager Chris Turner allowed him to go on loan to Swindon Town for a month, and a year later he was loaned to Macclesfield Town for the second half of the season, although he managed just four league appearances.

At the end of his contract with the Owls, Beswetherick signed for Bristol Rovers in the summer of 2004. The move saw him spend four months at the Memorial Stadium, but his only appearance was in a League Cup game against Norwich City at Carrow Road, when he started the game but was substituted after 59 minutes.

In November 2004 he once again found himself surplus to requirements and moved on to Kidderminster Harriers on a non-contract basis for two months. Other spells followed at Forest Green Rovers, Salisbury City, Mangotsfield United and Weston-super-Mare. In 2008, after an unsuccessful trial at Bath City, he joined Paulton Rovers, but his work commitments as a police officer with the Avon Constabulary prevented him from playing regularly.

In June 2009 Beswetherick retired from the game to concentrate on his career in the police.

Why didnt 'Bessie' score?! Absolute cult hero - sooooooo wanted him to score but it just didn't / wouldn't happen but I remember that cross-bar thumping moment, from a free-kick at Moss Rose when he clanked the woodwork with a wonderful free-kick vs Macclesfield Town - I thought that was THE moment. Sadly it wasn't! Missed him when he left Home Park and I hope he missed us. Also remember Neil Carhart purchasing some limited run of bottled beer that they sold in the Far Post Club with players' photos on them - needless to say we went for the Bessie variant! And it's probably still on a mantlepiece somewhere!

Greens on Screen is run as a service to fellow supporters, in all good faith, without commercial or private gain.  I have no wish to abuse copyright regulations and apologise unreservedly if this occurs. If you own any of the material used on this site, and object to its inclusion, please get in touch using the 'Contact Us' button at the top of each page. Search facility powered by JRank Search Engine. Hover facility courtesy of Milonic. UK time at page load: 19 April 2021, 22:33.