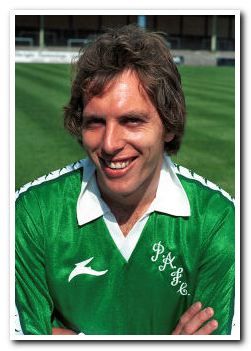 The fabulously-named Forbes Earnest Phillipson-Masters was born in Bournemouth in November 1955. Serving his youth career with Southampton, originally as a goalkeeper, he was initially released by Lawrie McMenemy. However, Saints' youth coach at the time, John McGrath, persuaded him to try his luck as a centre-half. It was a successful conversion which led to his debut for the Saints in the 1976-77 season. His time at the Dell included loan spells with Exeter City in 1976, hometown AFC Bournemouth in 1977 and Luton Town in 1978, before he moved to Home Park for £50,000 in August 1979. After over a hundred games in Green across four seasons, he moved to Bristol City where he stayed for 3 years. Whilst at Ashton Gate he had a second loan spell with Exeter City in 1985, and after his release by The Robins, played one season with the then non-League Yeovil Town before returning to the Dorset area, where he continued his involvement in local non-league football.