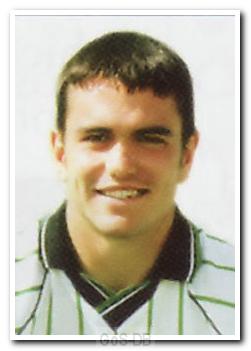 A product of the Argyle youth set-up, Phillips became Argyle's youngest ever player when he made his debut at just 16 years old. He made 61 appearances during his 5 seasons at Home Park, although most of these were as a substitute, and he never quite lived up to his potential. His only goal for Argyle came during the famous 'Jimmy Glass' game at Carlisle United. After suffering a broken leg he could not get back into the first team and joined Weymouth on loan, a move made permanent two months later. He stayed at Weymouth for four seasons, with a loan spell at Newport County halfway through this period, and had an impressive goalscoring record. In 2005 he was sold to Exeter City and scored 26 goals in just over two seasons there, but despite his good form, fell out of favour and moved to Torquay United. After a year at Plainmoor he joined Rushden and Diamonds before returning to Weymouth on a short-term deal and then moving on to Cambridge United.

Greens on Screen is run as a service to fellow supporters, in all good faith, without commercial or private gain.  I have no wish to abuse copyright regulations and apologise unreservedly if this occurs. If you own any of the material used on this site, and object to its inclusion, please get in touch using the 'Contact Us' button at the top of each page. Search facility powered by JRank Search Engine.Milonic UK time at page load: 21 January 2021, 07:59.