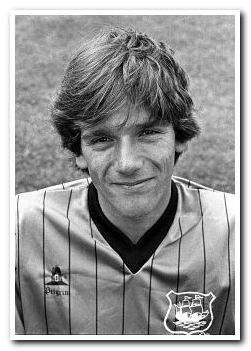 Philips was born in July 1963 at RAF Wegberg in the then West Germany. The Welsh right-midfielder's League career started at Home Park as an apprentice. Making his League debut as substitute in a 0-1 home defeat to Oxford United in August 1981, it did not take long for the 18-year-old to establish himself in the Argyle midfield, making 71 appearances across three seasons and featuring in the run to the FA Cup Semi Final at Villa Park. Having being capped at Youth and under-21 level by Wales whilst at Home Park, he won the first of his highly impressive 62 full caps in 1984, including in Wales' Home Championship win against Bobby Robson's England side at Wrexham's Racecourse Ground.

It was unlikely a now full international would remain playing tier three football for very long and it was no great surprise that he moved to top-flight Manchester City in August 1984. 81 appearances and 13 goals followed in a two-year stint for the Maine Road side, developing what would be a career-long penchant for long-range efforts and BBC Match of the Day 'Goal of the Month' nominations. In an era before player's names were mandatory on the backs of shirts in the Football League, Phillips at least had his on the front, as his surname was also that of City's illuminating sponsors for most of his stay. Phillips moved from City and was signed for Coventry City by George Curtis and former Argyle man John Sillett.

His spell at Coventry was a further success, bringing an FA Cup Winner's medal in the 1987 Final and a runners-up medal in the same season's Charity Shield. Philips played over a century of games for three clubs in the middle of his career: Coventry City, Norwich City and Nottingham Forest. The £550,000 that Norwich paid to take him from Coventry in 1989 was then the club record and he helped Norwich finish an all-time-best 3rd place in the inaugural Premiership season of 1992-93. After leaving Forest, whom he helped into the Premiership in his first season at the City Ground, he moved to Huddersfield Town and then Lincoln City. Moving into non-league football he played the 2000-2001 season with Stevenage Borough before retiring from the game.

Phillips made just over 600 Football League appearances and scored over 60 goals in a highly successful league career that spanned almost two decades from his start with Argyle.