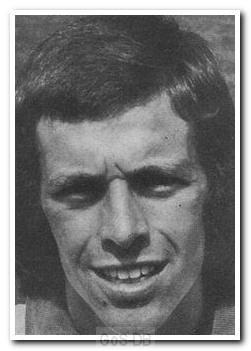 Pearson was a school-teacher and a part-time professional who had two spells at Home Park, almost a decade apart, and whose career dipped in and out of the Football League. Originally spotted by Argyle playing for Goole Town, the Leeds-born forward moved to the club in July 1974 as a Tony Waiters' signing. He made a dozen appearances across two seasons, split equally as starts and substitute, but failed to find the net. He left Devon to sign for non-league Wycombe Wanderers, where he spent a season before getting another opportunity in the League with Millwall. He was an almost ever-present for The Lions in the 1977-78 season before being lured back to Devon by Exeter City for £25,000 in November 1978. In a three-year spell he played 69 times for The Grecians, scoring 10 times. He then moved out of the League again, signing for Bideford Town where he spent three seasons. He then briefly returned to play in green for one final foray into League football when he answered an SOS call from John Hore, who had just succeeded Bobby Moncur six games into the 1983-84 season. Hore and Pearson had worked together in several seasons at Bideford and one of Hore's first moves as manager was to swoop back to The Sports Ground to sign him a second time for Argyle, some nine years after his first spell. Though making fewer appearances in his second spell, he did score his sole Argyle goal, away at Bournemouth in October 1983, and also played at Highbury against Arsenal in the League Cup later that month. After Argyle he returned to Bideford Town as both player and assistant manager. In a peripatetic career which spanned a decade, he achieved a respectable total of 133 Football League appearances and 20 league goals, with many more in the non-league game.