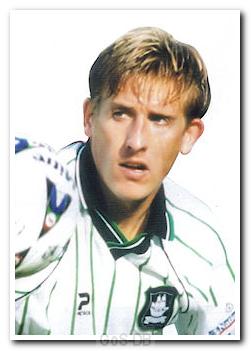 Came from: Rochdale   Went to: Nuneaton

Beginning his career as a trainee with hometown club Leicester City, Peake struggled to break into the first team and spent a loan spell at Hartlepool United before being released after just five starts in two years at the club. He moved on to Halifax Town but was not a regular in the side over nearly two years there and joined Rochdale in a player swap deal. Spending just over two years at Rochdale, he was virtually ever-present in the midfield and became a crowd favourite. Despite this, he chose to transfer to Brighton and Hove Albion when his contract expired, a move which was not a great success. After a brief spell with Bury he returned to Rochdale and again enjoyed a successful period there, but when he was unable to agree a new contract left to join Argyle. His time at Argyle was short-lived as he fell out of favour following the arrival of Paul Sturrock, and he joined Nuneaton Borough on loan, a move soon made permanent, and ended his career there.