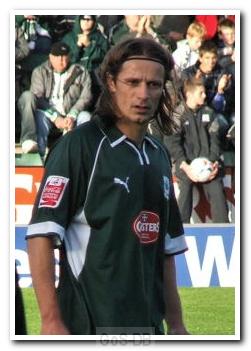 Nalis joined Argyle on a free transfer after his release by Sheffield United. A product of the Auxerre youth system, he had spells with Caen, Laval, Guingamp, Le Havre and SC Bastia in Corsica before moving to Italy with Chievo Verona in 2002. An energetic midfielder, Nalis was brought to England by Leicester City in 2003 and spent two seasons with the club before moving to Sheffield United. He spent a month on loan to Coventry City before agreeing to cancel the remaining 18 months of his contract to join Argyle.

'Lil' spent two-and-a-half very productive seasons at Home Park and became a firm favourite with Argyle fans, who named him the Player of the Year in 2006-07. He was released In April 2008, at the age of 36, and then spent a season at Swindon Town before returning to Bastia on the Mediterranean island of Corsica, this time playing for CA Bastia, for whom he made 25 appearances in the 2009-10 season. In 2010 he retired from the playing side and was appointed the club's assistant coach. In the following three years, CA Bastia celebrated two promotions to enable them to compete in Ligue 2 (the French equivalent of the English Championship) for the 2013-14 season.

Lilian Nalis, one of my favourite ever Argyle players. A fantastic player for Argyle who was always winning and distributing the ball to his teammates. Lil won Player of the Season for 2006-07, and deservedly so and he's probably the Argyle player I miss the most! Irreplaceable.