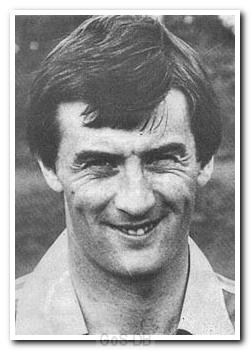 Dubliner Donal Patrick Murphy was a young wide-midfield prospect spotted playing in the highly competitive youth leagues around Dublin. After one 40-goal season he was selected for the Republic's Youth team but his two caps were not successful, one of them coming in an 11-0 drubbing by England. Undeterred, he declined the obvious routes to success of Manchester United and Leeds United, and signed for Coventry City in August 1972. Making his first team debut three years later, Murphy made a total of 43 appearances for the Sky Blues, scoring 10 times. Whilst at Highfield Road he was loaned to Millwall for a month in the 1977-78 season, and then in May 1978, left Coventry for Torquay United. After two years at Plainmoor, in which he made 85 appearances and scored 20 times, he came to the attention of Bobby Saxton who signed him for £65,000 in June 1980. A productive spell across two seasons followed, within which a one month loan spell back at Plainmoor in December 1981 produced a further three appearances for The Gulls. Murphy left Home Park in February 1983 to sign for Blackburn Rovers, but he made only three appearances for the Lancashire club. Returning to the Republic, Murphy later played for Bohemians, Drogheda United and University College Dublin (UCD), winning a runners-up medal in the 1984 FA of Ireland Cup with the latter and also playing against Everton in the European Cup Winners' Cup that same year.

Greens on Screen is run as a service to fellow supporters, in all good faith, without commercial or private gain.  I have no wish to abuse copyright regulations and apologise unreservedly if this occurs. If you own any of the material used on this site, and object to its inclusion, please get in touch using the 'Contact Us' button at the top of each page. Search facility powered by JRank Search Engine.Milonic UK time at page load: 26 February 2021, 18:49.