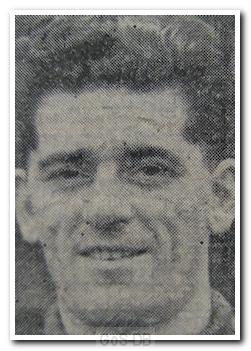 1. Came from: Sunderland   Went to: Career interrupted by WW2

2. Came from: Career interrupted by WW2   Went to: Bradford City

Middleton was one of six Pilgrims who made their Argyle debut in one of the three games of the abandoned 1939-40 season. Born in the village of Boldon Colliery on South Tyneside, he started his goalkeeping career with Newcastle United Swifts before playing for Boldon Colliery Welfare. In 1930 records show he had a trial with Charlton Athletic at the age of 23 but no appearances were made and he returned to the North East. The following year he signed for Southport and made his League debut, going on to play 63 times before moving closer to his roots to sign for Sunderland in 1933. He went on to make 56 appearances for the Wearside club before making the long move to Home Park in 1939.

Middleton played in all three games of the abandoned 1939-40 season and following the declaration of war, he continued to play in the South West Regional League until he was drafted into the mines. Playing regularly as a guest for Middlesbrough during the war, he also appeared for Carlisle, Darlington and Horden Colliery Welfare.

Amazingly, Middleton resumed his Argyle career in the Football League South season of 1945-46 whilst still working in the mines of Derbyshire. Reports describe the lengths to which he would go; travelling to Plymouth on a Friday night after a long day under ground, followed by an overnight return after the match for his next shift in the mine. His time at Argyle ended when 'keeper Bill Shortt was posted to the Plymouth area and became available, initially as a guest.

Following the resumption of the full League programme, Middleton continued his football career, signing for Bradford City in 1946 and making 94 appearances in a two year spell. He then moved to York City where he added a further 55 League appearances before winding down in non-league football in the North East with Blyth Spartans and then Murton Colliery Welfare.

As a footnote, Matt's brother Ray was also an accomplished goalkeeper, making over 350 league appearances for Chesterfield and Derby County and winning four England B caps in a career that also survived war interruption. Ray also became footballs first and (at the time of writing) only active Football League player to serve as a Justice of the Peace. Like Matt, he worked in the mines during the war; according to Jack Rollins Soccer at War, 1939-45 he reportedly insured his hands for the then small fortune of £2,000. It is not known if Matt took out a similar precaution.