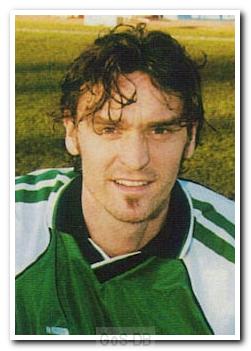 Middleton began his career as a trainee with Coventry City, making just four appearances in four years at the club before joining Cambridge United on a free transfer. His first team opportunities were limited at Cambridge due to injury problems and he was released at the end of his contract. Signing for Cardiff City, he was virtually ever present in their side over the next three years, before falling out of favour and joining Argyle on loan. Shortly after this one month loan period, he was sold to Halifax Town, where he played the last two years of his professional career. He also went on to play for Bedworth United.

Greens on Screen is run as a service to fellow supporters, in all good faith, without commercial or private gain.  I have no wish to abuse copyright regulations and apologise unreservedly if this occurs. If you own any of the material used on this site, and object to its inclusion, please get in touch using the 'Contact Us' button at the top of each page. Search facility powered by JRank Search Engine.Milonic UK time at page load: 24 January 2021, 06:04.