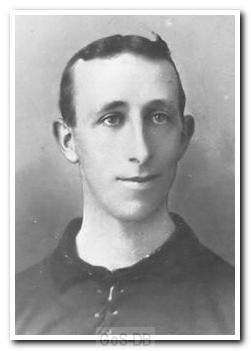 McLaughlin was born in Glasgow in 1881 and began his career with Cambuslang Hibernian, where he started at centre-forward before playing more frequently as an inside-forward. He came to the attention of Hamilton Academical, where he made his debut in the 1903-04 season before moving to England to join Everton. His first game south of the border came in December 1904, and whilst at Goodison Park he scored five goals in 15 appearances.

McLaughlin then moved to Argyle in the summer of 1906 and was a fixture at inside-left throughout the following campaign. The Argyle handbook describes him as "a nice player, a fine passer and a good shot. With more dash would make a great player." However, after just one season at Home Park in the Southern League, he moved on to Preston North End, for whom he played a single game in 1907.

Leaving Deepdale, McLaughlin was re-signed by Hamilton in 1909 and was captain of the Accies side that took Celtic to a replay in the 1911 Scottish FA Cup Final, ultimately picking up a runners-up medal. Leaving Douglas Park for a second time in 1912, he signed for League of Ireland club Shelbourne in the September, by which time he had converted to a centre-half. In all he made 122 appearances for Hamilton and scored 19 goals, including one hat-trick.

He was also a school teacher as well as a fine footballer. He returned from Dublin to remain local to Cambuslang after his playing days were over.