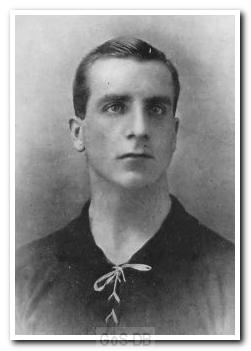 Came from: Alloa Athletic   Went to: Heart of Midlothian

Bauchop was born in Alloa in 1882 and played for his hometown club, Alloa Athletic, as well as Abercorn and East Stirlingshire, before heading south to join Argyle in the summer of 1905. Primarily an outside-left, the Argyle handbook of 1905/06 states that he was "a young stranger we know little of, but if trial matches go for anything he should turn out a real find". Sadly this optimism was not borne out and he made little impression on the first team during his single season at Home Park.

After moving back to Scotland to play for Heart of Midlothian, Bauchop also had a short spell with Carlisle United before spending two seasons with Stockport County. He scored 6 goals in 41 appearances for The Hatters and in 1911 signed for Leicester Fosse, playing 18 times in his only season at the club. He went on to play for Norwich City, Fulham and Grimsby Town before returning to Alloa Athletic to end his career.

Greens on Screen is run as a service to fellow supporters, in all good faith, without commercial or private gain.  I have no wish to abuse copyright regulations and apologise unreservedly if this occurs. If you own any of the material used on this site, and object to its inclusion, please get in touch using the 'Contact Us' button at the top of each page. Search facility powered by JRank Search Engine. Hover facility courtesy of Milonic. UK time at page load: 18 May 2021, 09:56.