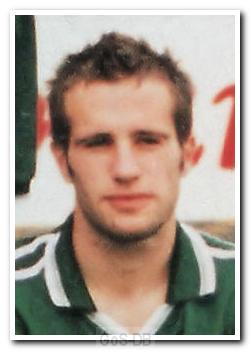 McGlinchey was one of Paul Sturrocks first signings at Argyle and a key player in the Division Three title winning season. He started his career with Manchester City but did not make a first team appearance in his three years with the club. After his release he spent a year with Port Vale before a move to Gillingham, where he played only occasionally during his 18 month stay. After arriving at Home Park he became the first choice left-back and was virtually ever-present in the team until suffering a broken bone in his foot. He did return however, to play a few minutes in the title-clinching win at Darlington. The following season he shared the left-back role with Hasney Aljofree and early in the next campaign joined Torquay United on loan. This move was soon made permanent and McGlinchey became a first team regular at Plainmoor until suffering an injury which eventually led to his retirement.

Part of the Third Division Championship winning side of 2001-02, Brian "Mad Dog" McGlinchey was a great example of the team ethos that underpinned the runaway success of those heady days.

Signed in December 2000 after a spell at Gillingham, he became first choice left-back, a reliable and energetic presence up and down the left wing and a popular figure amongst the fanbase.

The iconic moment that cements his place in our memomries surely has to be that goal away at Rushden in August 2001. Ro had pulled off "that save", we'd drawn level from being two down, and there he was to pop up and score the winner. The picture taken of his joyful celebration was practically a mirror of that famous Tardelli moment in the 82 World Cup. He would only score one more time for Argyle, at the right end, anyway.

Another memorable match for Glinch was Torquay, at home on Boxing Day when the new stands were opened for the first time. Two up, there came two calamitous moments as Glinch gave away an own goal and a penalty, ending the game in a surprising draw.

A measure of his popularity was that despite that error-strewn game, he remained a fans favourite, garnering great sympathy when a foot injury meant that he lost his place to Jon Beswetherick who made it his own for most of the rest of the season.

As with many of that legendary squad, he accepted his fate with good grace - something that was shown by his friendship with his rival, Beswetherick, which lasts to this day.

Injury curtailed his footballing career too soon, but his strong affinity with Argyle and Plymouth is evidenced by his remaining in the city to this day.

One of the good guys, for sure. One that knew that his place in the Argyle team was a privilege and one to be fought for.