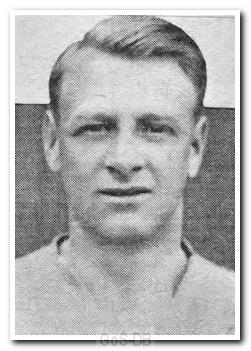 Note: Some books incorrectly spell his name as McDonald.

MacDonald was one of six Pilgrims who made their Argyle debut in one of the three games of the abandoned 1939-40 season. Born in Coatbridge in Lanarkshire, the inside-forward started his career with his hometown team and then moved to the unusually named Law Scotia, based in the village Law on the south-east side of Glasgow between Carluke and Wishart, south of Coatbridge itself. He was briefly on Dundee's books and then played for Broxburn United, Armadale and Airdrieonians before moving south of the border to sign for Manchester United in 1931.

He spent two years at Old Trafford, playing 27 times and scoring four goals. In 1934 he joined Tranmere Rovers for a two-year spell, making 81 appearances and scored 19 goals, and then spent a further two years with Coventry City, this time making 91 starts and scoring 24.

It was from Highfield Road that MacDonald moved to Home Park, playing in the first two games of the abandoned Football League competition, and then regularly in the South West Regional League until the end of the 1939-40 season. He then returned to Glasgow on war work, and also played for East Fife during the conflict. Being 34 at the outbreak of war, he had retired from the game by the time hostilities ceased.

Greens on Screen is run as a service to fellow supporters, in all good faith, without commercial or private gain.  I have no wish to abuse copyright regulations and apologise unreservedly if this occurs. If you own any of the material used on this site, and object to its inclusion, please get in touch using the 'Contact Us' button at the top of each page. Search facility powered by JRank Search Engine.Milonic UK time at page load: 21 January 2021, 09:04.