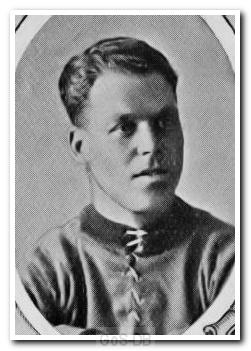 Note: Batten's total number of goals scored is one greater than in some publications. That's because of the match at Queens Park Rangers on 15 Mar 1923. Some books show the goalscorers as Fowler and Devine (2) but the following day's Western Morning News clearly describes the first goal as scored by Batten, and Devine scoring just one.

Batten began his career with Bristol City, joining Argyle after just one season with his hometown club. In nearly five years at Home Park he was a consistent performer and goalscorer at inside-forward and this led to his selection for the FA Tour of Australia in 1925. Down under he set a new record for goals scored by an English player on a Colonial tour, featuring in 25 of the 26 matches played and netting 45 times, including six goals against South Australia in Adelaide on May 16th and five against the Australian team on July 11th.

This form brought him to the attention of Everton and, after a delayed start to the following season because of the return voyage from Australia, he was sold to the Goodison Park club. Batten could not maintain a place in the side and moved to Bradford City a year later. He went on to play for Reading and Clapton Orient.

Greens on Screen is run as a service to fellow supporters, in all good faith, without commercial or private gain.  I have no wish to abuse copyright regulations and apologise unreservedly if this occurs. If you own any of the material used on this site, and object to its inclusion, please get in touch using the 'Contact Us' button at the top of each page. Search facility powered by JRank Search Engine. Hover facility courtesy of Milonic. UK time at page load: 22 April 2021, 20:22.