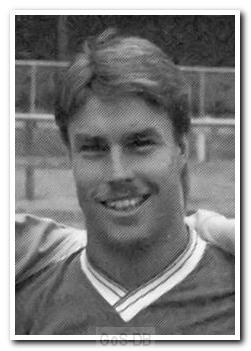 McCarthy began his career with hometown side Bridgend Town before a move to Swansea City, where his goalscoring record led to a move to Argyle. He became the perfect strike-partner for Tommy Tynan and banged in 25 goals in his first spell at Home Park. Moving to Bradford City in 1990 for a then record fee for an Argyle player of £250,000, he continued to score goals, finishing each of his four seasons at Bradford as top scorer. This form saw Oldham Athletic pay £500,000 for his services and he spent four and a half years with the club. After a loan spell with Bristol City, McCarthy returned to Home Park in 1998. He had lost much of his mobility, but still retained an eye for goal and the ability to hold up the ball. After three years with the club he finished his career with a couple of seasons at Exeter City. McCarthy is a member of the elite band to have scored more than 200 League goals in their career.

Greens on Screen is run as a service to fellow supporters, in all good faith, without commercial or private gain.  I have no wish to abuse copyright regulations and apologise unreservedly if this occurs. If you own any of the material used on this site, and object to its inclusion, please get in touch using the 'Contact Us' button at the top of each page. Search facility powered by JRank Search Engine.Milonic UK time at page load: 22 January 2021, 20:03.