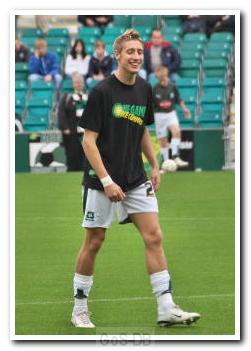 Not to be confused with the other Lee Martin (b.1968), who scored the winner for Manchester United in the 1990 FA Cup Final Replay against Crystal Palace, this Lee Martin came to Argyle on a short-term loan from Old Trafford after beginning his career at Wimbledon. He was unable to break into United's first team, and had loan spells with Royal Antwerp, Glasgow Rangers and Stoke City before arriving at Home Park. Despite Argyle's eagerness to extend the 20-year-old's loan, he returned to Manchester only to join Sheffield United on loan a few days later.

Martin also had a spell with Nottingham Forest before a permanent move to Ipswich Town in 2009 for an undisclosed fee, rumoured to be in the region of £1.5 million, where he was reunited with Roy Keane  the manager at Portman Road. He was initially used regularly, but he was then one of eight players made available for transfer at the end of the 2009-10 season. In August 2010 he joined Charlton Athletic on loan for the season, scoring twice in 20 appearances but was recalled in the New Year following Keane's departure, to be given a fresh chance by Paul Jewell. He became a regular at Portman Road again and went on to eventually accumulate 100 league appearances and scored six goals, either side of his spell at The Valley. However, another change in management in Suffolk spelled the end, as Mick McCarthy replaced Jewell and Martin was made available for transfer at the end of the 2012-13 season. In July 2013 he moved to Millwall on a one-year contract for the 2013-14 season, joining other former Pilgrims Shane Lowry, Paul Connolly, Jermaine Easter and Nadijm Abdou at The New Den.

In the January 2016 transfer window, Martin joined League Two Northampton Town on a one-month loan deal, which was then extended until the end of the season. He made ten appearances for the Cobblers before signing for Gillingham on a two-year deal in July 2016.