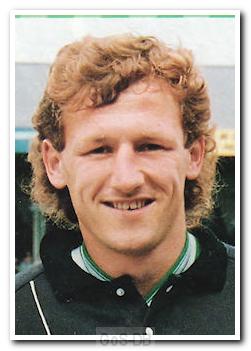 Arguably the finest signing Argyle have ever made from Devon rivals Exeter City, Nicky Marker provided five years' sterling service at Home Park before going on to reach the very top of the English game. Signed by Dave Smith in 1987, any doubts Argyle fans may have had about the former Grecian were quickly dispelled by a series of cultured, committed displays in the centre of midfield. It was unfortunate for Marker that he joined the Pilgrims just as a brief golden era was giving way to a prolonged spell of mediocrity; had he joined when Smith's men were at their peak, he might have been the final piece in the jigsaw to propel Argyle into the top flight for the first time in their history.

As it was, Marker's considerable presence on a football pitch was diluted somewhat by a seemingly endless relegation scrap that haunted the managerial reigns of both Ken Brown and David Kemp. But Marker thrived under Kemp, a man he had immense respect for, and enjoyed his finest spell in a green shirt under the former Argyle striker. But the arrival of Peter Shilton at Home Park in February 1992 was the watershed moment in Marker's Argyle career. The pair failed to see eye to eye almost from day one  with Shilton keen to sell his most valuable asset, and Marker digging in his heels and refusing to go without a fight. In the end, ambitious Premier League club Blackburn Rovers came calling with an offer that Marker could not refuse, and so the Argyle skipper departed for Ewood Park  leaving Shilton with £500,000 plus Craig Skinner and Keith Hill in part exchange.

Marker spent five seasons in Lancashire, but made just 54 appearances  not one of them during Rovers' title-winning season of 1994-95. He left Blackburn to sign for Sheffield United in 1997, and scooped a Player of the Year award at Bramall Lane before a change of manager led to him falling out of favour. He returned to Home Park for a four-match loan spell in February 1999, but his 33-year-old legs were by then failing him and  understandably  he was not the force that Argyle fans remembered.

Greens on Screen is run as a service to fellow supporters, in all good faith, without commercial or private gain.  I have no wish to abuse copyright regulations and apologise unreservedly if this occurs. If you own any of the material used on this site, and object to its inclusion, please get in touch using the 'Contact Us' button at the top of each page. Search facility powered by JRank Search Engine.Milonic UK time at page load: 24 January 2021, 06:23.