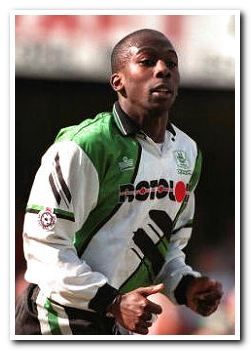 Beginning his career with West Bromwich Albion, Littlejohn was released without playing a first team game. After two years at Walsall he moved on to Sheffield United, where he made a name for himself by scoring 8 goals in the inaugural Premier League season. A pacey goalscorer, he arrived at Argyle in September 1995 to much expectation and quickly established himself in the team, netting 17 goals in his first season to finish as top scorer. He was a vital part of the team that won promotion to the Second Division at Wembley in 1996, but a return of just eight goals in 60 Division Two games saw him move to Oldham Athletic in a swap deal with Phil Starbuck, linking up again with Neil Warnock. He followed the manager to Bury just months later and linked up with him for a fourth time when he returned to Sheffield United in 2001. Littlejohn went on to play for Port Vale, Lincoln City, Rushden and Diamonds and Mansfield Town before ending his career in non-league football with Leek Town and Retford United.

Greens on Screen is run as a service to fellow supporters, in all good faith, without commercial or private gain.  I have no wish to abuse copyright regulations and apologise unreservedly if this occurs. If you own any of the material used on this site, and object to its inclusion, please get in touch using the 'Contact Us' button at the top of each page. Search facility powered by JRank Search Engine. Hover facility courtesy of Milonic. UK time at page load: 22 April 2021, 21:28.