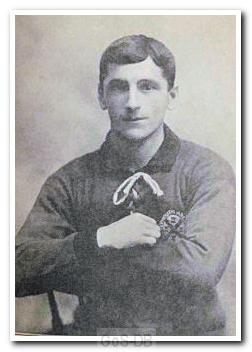 1. Came from: Dumfries   Went to: Career interrupted by WW1

Kirkpatrick was born in Dumfries in 1887 and began his career with his hometown club. In 1911 he joined Argyle and spent nine seasons with the club, either side of World War One. A consistent performer at outside-right, he was a regular member of the first team until hostilities broke out in 1914. The 1913-14 club handbook memorably stated of Kirkpatrick: "A model wing player, possessed of speed, cleverness and daring. Admits he isn't big, but says he is made of the right stuff, and is proud of Dumfries, which we believe is in Scotland."

During the war he worked at, and played for, the Devonport Dockyard before returning to Home Park at the end of the conflict. Over the next five seasons he found his first team opportunities increasingly limited and in 1924 followed Argyle team-mate Harry Raymond, the new Torquay United player-manager, to Plainmoor, where he ended his career.

Greens on Screen is run as a service to fellow supporters, in all good faith, without commercial or private gain.  I have no wish to abuse copyright regulations and apologise unreservedly if this occurs. If you own any of the material used on this site, and object to its inclusion, please get in touch using the 'Contact Us' button at the top of each page. Search facility powered by JRank Search Engine. Hover facility courtesy of Milonic. UK time at page load: 23 April 2021, 04:10.