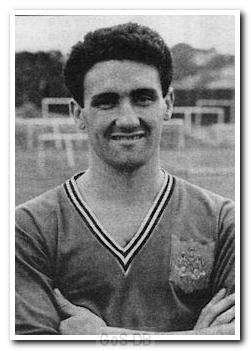 Came from: Wellingborough   Went to: Aldershot

Kearns began his career with Wellingborough Town, joining Argyle in 1956, after which he soon established himself in the first team. He played sixty games in his first two seasons at Home Park, mostly at inside-forward, but lost his place after the arrival of Jimmy Gauld. After a brief loan spell with Corby Town he moved on to hometown club Aldershot, where he spent six years and made over 180 appearances. He ended his career with Lincoln Town before moving into non-league football with Weymouth.

My name is Hollie Kearns, I am 19 years old and I'm from Weymouth, Dorset. I have been browsing your website and I came across my Grandad's page; Peter Kearns.

Just wanted to let you know that all information seems to be correct, but I will speak to my Dad who may be able to give you some more information about his football career.

Peter Kearns in the close season worked for W.C. Cooper & Son, Plymouth. Would be great if someone could confirm!

Peter Kearns was one of life's good guys. We lost him a few years ago to Alzheimer's. Good honest player and lived his life the same way. Finished football with Weymouth and tried pub manegement for a few years before going into management with the Dorset Echo, ending on retirement.

Thanks for the confirmation Barry. My Dad Jim worked for WC Cooper (Harry Cooper) for many a year. I remember a friendly game pre-season between Coopers and I believe Henry Lawley Builders.

Which Peter played in what season? I recall scaffolding pipes being used as posts/crossbars.