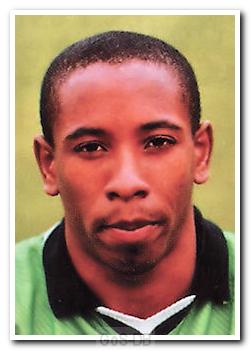 Jean is a former St Lucian international striker who played more than twenty times for his country. He began his professional career in Portugal, playing for Oliveirense, Uniao de Coimbra, Leca and Felgueiras. He first came to England in 1996, spending a brief spell with Ipswich Town before moving on to Rotherham United after just one appearance. A decent goalscoring record during his six months at Rotherham led to a move to Argyle and he spent two years at Home Park, playing regularly but as often as not from the bench. Jean returned to the Caribbean with W Connection in 1999, before a short return to the UK with Hibernian the following year. After a second spell with W Connection, he played for Hefei Chuangyi in China before returning for a third spell with the Trinidad side. Four years later he moved to San Juan Jabloteh where he ended his career as player-coach.