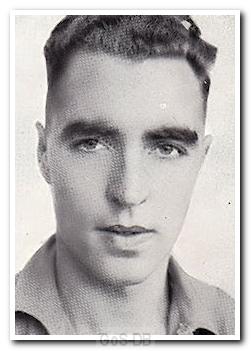 The Liverpool-born centre-forward joined Argyle from Everton, his first club although he did not make a first team appearance. Whilst at Goodison Park he had a loan spell with New Brighton, for whom he made his League debut, showing good early promise with 8 goals from 13 appearances. Moving to Home Park in 1937, he developed an excellent scoring record of 20 goals in just 29 games spread across the end of one season and the start of the next. It was enough to earn a move to Manchester United in 1939 but the outbreak of the Second World War meant he never played for the Old Trafford club. At the end of the war he played for Merthyr Tydfil and also turned out in a friendly for Argyle, who decided against re-signing him. In the 1947-48 season he scored 15 goals in 27 games for Cardiff City before moving to Nottingham Forest for 13 games. He then wound down his career with a return to Merthyr Tydfil as player manager and a spell with Worcester City.

Greens on Screen is run as a service to fellow supporters, in all good faith, without commercial or private gain.  I have no wish to abuse copyright regulations and apologise unreservedly if this occurs. If you own any of the material used on this site, and object to its inclusion, please get in touch using the 'Contact Us' button at the top of each page. Search facility powered by JRank Search Engine.Milonic UK time at page load: 22 January 2021, 12:30.