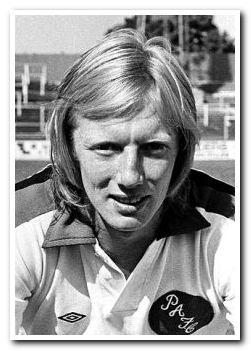 Horswill was born in Annfield Plain in County Durham and served his apprenticeship with Sunderland before signing professional terms in 1971 and making his debut the following year. The popular midfielder was a key part of Sunderland's run to the 1973 FA Cup Final and he was in the Wembley line-up that famously - as a Second Division side - beat top-flight Leeds United 1-0 to earn him a winners' medal. He went on to play 69 times in three years for the Roker Park side before moving to Manchester City, where his time was to be more frustrating, with just 14 appearances in two seasons. Moving to Home Park in the summer of 1975 as part of Tony Waiters' strengthening of the side following promotion, Horswill's busy, bustling style made him popular with fans. He clocked up over a century of appearances in green in three seasons in Devon, including relegation in 1976-77.

At the end of the following season he moved to Hull City, where he played 84 times in a four-year spell. It was in his first appearance back in Plymouth, after nine months as a Tiger, that he achieved what is probably the fastest booking ever seen at Home Park; no doubt over-exuberance was the reason for his name in the book after just seven seconds. After Hull, he spent a brief spell with Happy Valley in Hong Kong during the 1982-83 season before returning to the UK and making a solitary appearance for Carlisle United as a non-contract player. He then wound down in non-league football with Barrow and went on to maintain an involvement in the game after his playing career was over through punditry on local radio in the North East.

Greens on Screen is run as a service to fellow supporters, in all good faith, without commercial or private gain.  I have no wish to abuse copyright regulations and apologise unreservedly if this occurs. If you own any of the material used on this site, and object to its inclusion, please get in touch using the 'Contact Us' button at the top of each page. Search facility powered by JRank Search Engine. UK time at page load: 10 April 2021, 12:57.