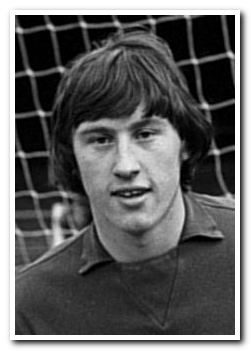 1. Came from: Apprentice   Went to: Everton

2. Came from: Rochdale   Went to: Retired

A product of the Argyle youth team having been spotted playing for Southport Trinity, Hodge established himself as the Pilgrims' first team goalkeeper at the age of 19. His potential was soon spotted by Everton and he moved in a &pound135,000 transfer in 1979. With his first team chances limited, he had loan spells with Preston North End, Oldham Athletic and Gillingham before being sold to Sheffield Wednesday. After five years at Hillsborough, during which he was on the fringes of the England squad, Hodge moved to Leicester City and later played for Hartlepool United and Rochdale. Hodge returned to Home Park in 1994 and played for two more seasons before moving into coaching.

Greens on Screen is run as a service to fellow supporters, in all good faith, without commercial or private gain.  I have no wish to abuse copyright regulations and apologise unreservedly if this occurs. If you own any of the material used on this site, and object to its inclusion, please get in touch using the 'Contact Us' button at the top of each page. Search facility powered by JRank Search Engine.Milonic UK time at page load: 16 January 2021, 20:43.